An interview with Hannah Stouffer 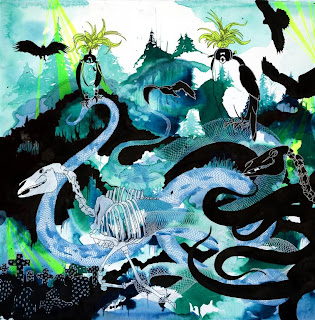 The heart of darkness exists within the light. Black Dawn, Dawn After Dawn Tepid Neon, Frozen Clarity. This contrast, and the ever present existence of the two is constant. Macabre Elegance. Darkness Falls Forever... Since The Beginning.

Los Angeles-based illustrator Hannah Stouffer finds a great deal of comfort in imagery- it's an admiration that is often times overwhelming. With an infatuation for icons and images that reflect and categorize historical eras, genres and subcultures, her work is an opulent, elegant and beautifully intricate mixture of illustration and design. Her densely-packed compositions consciously recall classical elements from our past and combine them with our modern attractions, creating cohesive yet opposing array's of imagery and embellishment. She focuses on the contrasts between periods in time, subcultures and social trends- and merges them together with a high regard for traditional decoration.
We recently swung by her Los Angeles studio to take a look at what she's been up to and snapped the below shots to share with you all.
Hannah has been an exhibiting artist for over five years now and has shown with the likes of White Walls, 111 Minna, Compound Gallery, Giant Robot, Nucleus Gallery, DDR Projects, Gallery 1988, Together Gallery, BLVD Gallery, Arspace Gallery, Plastic Chapel, National Product, Ghetto Gloss, Receiver Gallery, Nest, Show Cave, Parlor Gallery, Pulp Gallery, Lower Hater, Hotel Des Art, Primary Space, Plush Gallery, Aspen Art Museum, Domy Gallery, Grey Area Galery, Space Gallery, Vener Gallery, Bliss Gallery, Vitale Gallery, Canvas Gallery, and CC Rider. 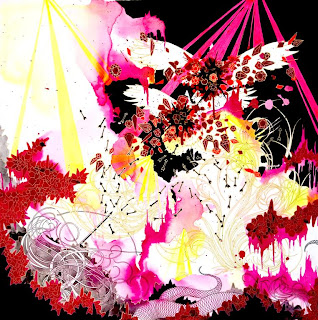 Look for a small show of new works on our 'Fresh Faces' wall this July alongside Stella Im Hultberg and Catherine Brooks, and we have plans to take her down to Miami this coming December during Art Basel.

Then, in March 2010, we'll be rockin' a full-on solo in our project room with Hannah and continuing to build from there. We are SUPER jazzed to be working with her, and can't wait for more to be exposed to her vibrant and unique work. 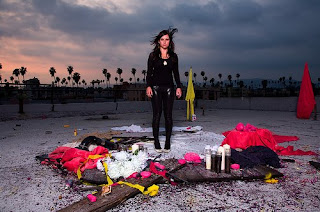 Be sure to keep an eye out for the new Art Ltd with Josh Keyes on the cover. One of Hannah's pieces grace a full page and is included as part of a great feature about eco-driven art, "Unnatural Selection". She's also been featured in the past in Juxtapoz, XLR8R, IDN, Communication Arts, Art Bureau, and Refused.

In addition to her fine art, she has also lent her work to such companies as Upper Playground, Nike, VANS, American Express, GNU Snowboards, Element, Poketo, Metropark, Foreign Family, Benefit Cosmetics, Dunlap, Rocket Dog, Northface, Secret, Disney, Camel, Coca Cola, Sony, Dell, Chronicle Books and Blood Is The New Black.... to name but a few. She was also recently chosen to take part in the high profile 1800 Tequila campaign where each artist in the series received their own special numbered production bottle, not to mention billboards in select areas. Oh, and her work also enhanced a recent Ludacris video.
http://www.hannahstouffer.com/
http://www.flickr.com/grandarray
http://www.grandarray.blogspot.com/ 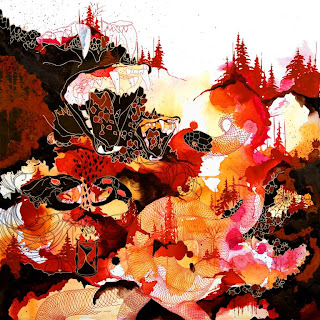 Talk a lil' bit about the general idea/vibe behind your new series of works that you created for your recent solo show, ‘Darkness Falls Forever’, that took place at Gallery 554 in Hollywood?
'Darkness Falls Forever' was created immediatley after my move from SF to LA and I think that there was a lot of situational and emotional analogies to what i was going through- there is a lot of darkness. I was reading some fantasy and listening to a lot of metal and subconsciously created a series that represented this whole era of change. There is a lot of contrast and struggle, but also a lot of components of growth and overwhelming emotion in there as well... I also did a an altar/shrine installation for this show that represents the cycle of change, from a very basic level of existance - both personal and universal. 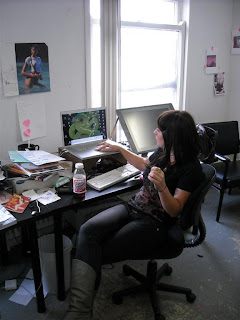 What’s your earliest memory involving art or creating art?
My brain has a hard time with that, though I know I've been involved with art since the beginning - I remember getting in trouble at school a lot - and my mom has kept most of what I created - so I guess my memories come from visuals. 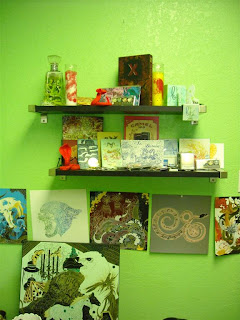 When are you most productive / when do you normally work on art?
Day in, day out - mornings, weekends... I've kind of stopped working late at night - unless I have a big show coming up - when I close my eyes at night I always hope that it will just all disappear... 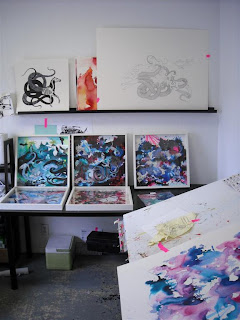 What do the recurring snakes in your work symbolize to you?
Obsessive repitition and childhood nostalgia- a little bit of lust and gore.
Tell us something about yourself that someone would never guess in their wildest dreams.
Knuckles of lightning + 3 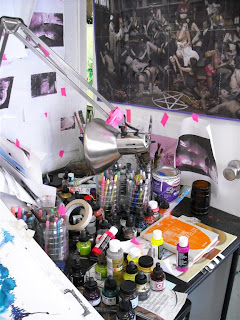 Are you reading anything right now?
Guinness Book of World Records from 1990, an old almanac I found on the street and a pictorial Encyclopedia from the Thrift Store that my mom works at... I keep it pretty factual - it's all research, it's all relevant and totally fascinating. I learned about Catacombs, Black Holes and astroids last night. 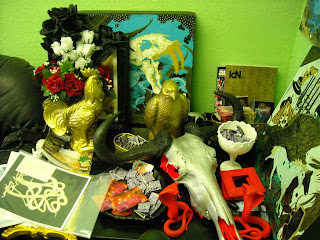 Do you listen to music while painting/drawing? If so, do you have a current favorite that inspires?
Yes, I absolutley have to... usually really loud, and usually pretty gangster. I'll make playlists of hip hop, metal, some older stuff, some booty bass, RnB... a lot of Mac Mall, Sabbath, Dust, R. Kelly, DJ Screw- you know...

If you had to explain your work to a stranger, how would you do so?
Intricate, decorative linework, dark contrasts, a little bit of fantasy and a lot of the animal kingdom. 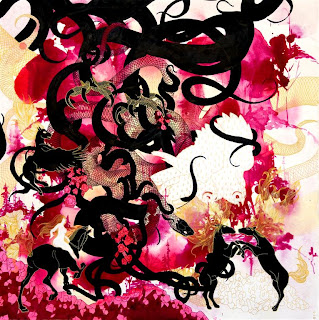 Favorite artist (living or dead) and what makes them special to you?
I have a lot of favorite contemporary artists.. mainly illustrators, and painters- Skinner, Richard Coleman, French- Simmons and Burke and Owl Eyes do some amazing collage work. Then there's Erika Somogyi, Rebecca Bird and and older fantasy painters like Chris Achilleos and Boris, I'm always drawn to Warhol though, and his versatility and the strength of simplicity in his works, he knew exactly what he was doing... 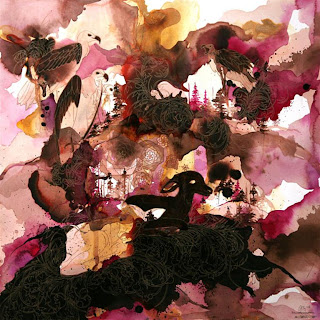 If people walk away with one thing gained/learned from one of your shows, what would you hope that would be?
The greatest human conflict is dealing with contrast. 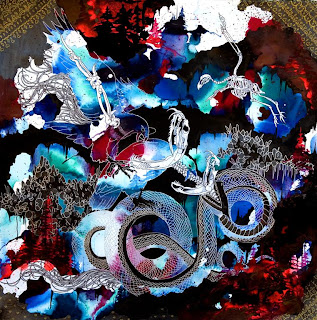 Other than the plans for your solo show with us in early 2010 and the ‘Fresh Faces’ wall this July, what else have you got coming up in terms of exhibitions and illustration related jobs?
There's a lot I want to accomplish in the next year, I have shows lined up both nationally and abroad. In terms of commercial work, I'm doing an artist series of signiature Vans, a jacket with Northface, and some apparel and product with Element. I'm about to put out a book that has been in the works for some time now - I'm reeeeally excited about that - I'm always pretty excited. I recently finished up some erotica projects with Chronicle books as well... I'm planning on taking some trips to Barcelona and Berlin in the summer and Tokyo in the fall... lots of forward progression and living now. 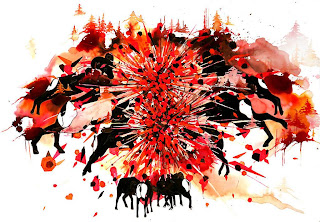 What are you doing right after this interview?
Probably searching for something to snack on, or drinking whisky, or both... probably both. 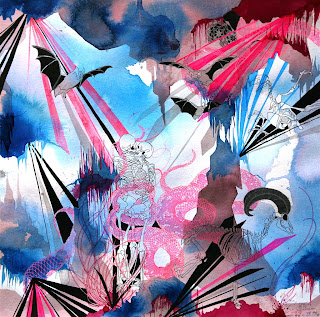 Lauren Graham from JackAssWorld.com spent a day following Hannah about as she prepared for her recent solo show, 'Darkness Falls Forever', this past winter at Gallery 554 in Los Angeles. Check out the feature below and get ready for Hannah's upcoming shows!
Posted by Andrew Hosner (founder / editor) at 8:07 PM