An interview with David MacDowell... 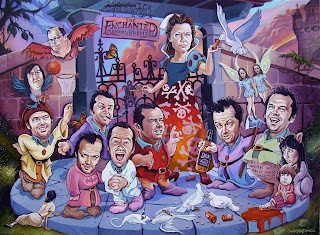 "The Enchanted Mental Hospital" - 24x20"
An interview with David MacDowell
1) Please talk a lil' bit about the general idea/vibe behind your new series of works for your upcoming solo show with us.
The overall push is to embrace our inner “crazy-person”. We’re all wild kids at heart, but life has a way of binding/repressing our desires for fun and freedom. This show reminds us that we can again view the world with child-like wonder against all odds.
2) What’s your earliest memory involving art or creating art?
Crayon’s and coloring books were serious business back in the day. I believed that coloring books were secretly given to me by their creators. I thought Josie and The Pussycats would be mad at me if I didn’t color their book the best that I could. These cartoon stars were gods, watching and judging my work. Talk about pressure on a kid, man!

"The Jaws Of Metal" - 24x20"
3) When are you most productive / when do you normally work on art?
I’m a 24-7 artist, and have around 16 hours a day to achieve the goal. Every working hour can feel like a minute, if you’re working it right. As anyone passionately in love with someone/ a project knows, time stands still. To make time stop, as long as possible, is the greatest thing in this world.
4) You are a completely self-taught artist, care to share with us how you developed your unique style, not to mention how you came to your totally eye-popping color palette?
I was broke and starving in early 2007, and my friends from California sent me a big box full of over a grand in Liquidex paint. I vowed to them and myself that I’d learn these colors to get their investment back. I taught myself color theory, and how to appear like I was painting professionally. Darker primary colors and a script brush became a habit that worked. 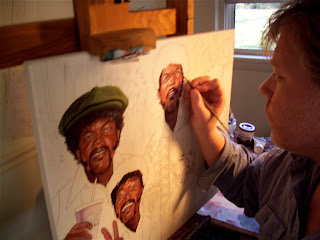 "The Samuel Jackson 5" in progress 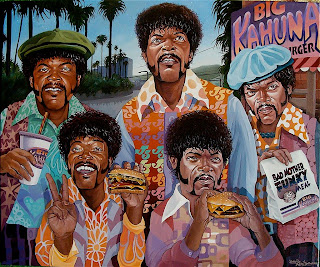 "The Samuel Jackson 5" complete - 24x20"
5) For those new to your work, can you give us a lil’ background on the meanings associated with some of your recurring characters like your lil’ devil girl, the Manson references and your love for Jack Nicholson and Samuel L. Jackson?
I started doing cultural parody and celebrity satire, and they blew up all over the Internet. I was too poor to get prints made, so I kept giving people what they wanted more of. People kept requesting intricate pop-culture scenes, and twisted movie themes, and I kept painting them, and they have all gone on to happy homes.

6) You’re far removed from the Los Angeles and NYC art scenes, but showing regularly in both areas. How does it feel being in such an isolated locale, while still branching out and growing as an artist in these major art centers… do you feel this helps you in some way?
I used to live in NY; so living in Virginia is like being isolated in outer space sometimes. Ground Control to Major Tom, anyone? I often get real anxious wishing that I could be at more of the openings, but I show often, so I have to remain chained to the easel. The cool thing is that I’m always accessible to everyone throughout the world, and never say no to helping people’s visions and dreams come to life.
7) Tell us something about yourself that someone would never guess in their wildest dreams.
Twice a week, I’m forced to wear a dress when I’m playing Barbie Princess’s with my daughter. I once beat up an English teacher at a keg party. Thinking back, I’m starting to see that my life outside of art was pointless and dangerous. 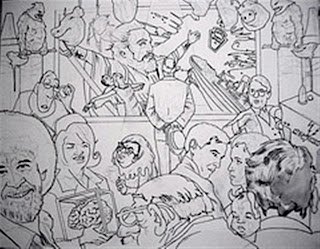 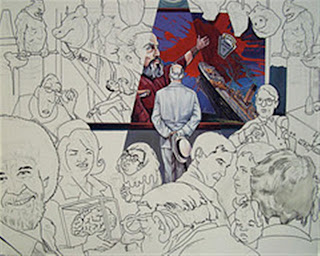 "The Critical Mass" complete - 20x16"
8) Do you listen to music while painting/drawing? If so, do you have a current favorite that inspires?
While working on this solo, it was pretty much a Beatles festival. I found a site that had 100’s of hours of outtakes and studio mistakes. So I downloaded all of it and listened religiously. To hear musical god’s being human is really surreal and inspiring. 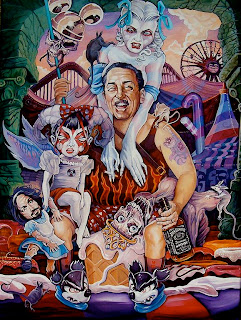 "Welcome To The Terrordome" - 18x24"
9) If you had to explain your work to a stranger, how would you do so?
I’d say, “My work is a fun-loving poke at consumerism, pop culture and the cult of personality.”
10) Favorite artist (living or dead) and what makes them special to you?
I’d say probably Todd Schorr. I wish I had the time to fill a gigantic canvas with intricate detail, like he does. I know all of the artist’s out there, and like American Top 40, I often wonder, “What does it take to be #1?” I’m just always trying to expand and create the most kick ass paintings that I can. 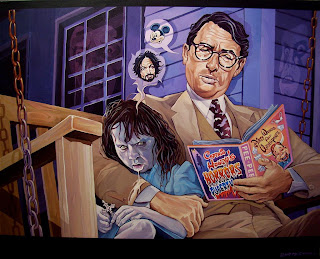 "Parents Just Don't Understand" - 20x16"
11) What have you got coming up in terms of shows and projects after your solo show with us?
2009 will be busy, and a blast! I’ve got some cool group shows coming up, and I’m excited to be showcased at AdHoc Art out in NY and The Alcove in GA. My goal for the 3rd quarter of this year is to parlay my talents into print media and film. I never know the mechanics of how these goals come to fruition, but they systematically always do.
12) If people walk away with one thing gained from seeing one of your exhibits, what would you hope that would be?
I’ve seen everyday people walk away mind-blown and giddy. They forget about their responsibilities for awhile, and get personally touched by the experience. It’s a pretty profound event to witness, and it validates the entire purpose of sacrificing being a normal human being, to live this dream. 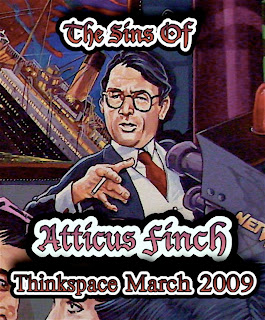 13) What are you doing right after this interview?
Brainstorming the next coolest thing to create!
Be sure to come on out to Thinkspace next Fri, March 13th for the opening of The Sins Of Atticus Finch. Dave will be in town and eager to chat with everyone, so come on out and say hi!
David MacDowell
The Sins Of Atticus Finch
Opening Reception: Fri, March 13th 7-11PM
Thinkspace
4210 Santa Monica Blvd.
Los Angeles, CA 90029
http://www.thinkspacegallery.com/
David MacDowell website: http://www.macdowellstudio.com/
Posted by Andrew Hosner (founder / editor) at 6:37 PM