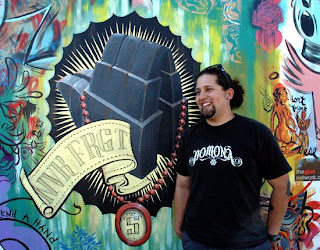 An interview with Johnny "KMNDZ" Rodriguez
1) Talk a lil' bit about the general idea/vibe behind your new series of works for "Red Forest" with Ekundayo.
The show deals with what the Nuclear reactor explosion did to the people of the Soviet Union as well as the dabbling of the negative in all its forms and what it is doing to our hearts here in Los Angeles. That might be the simplest way I can describe the show.
For instance, you might see what looks like green goo/radio active junk in many of the featured works in the exhibit. In the world of Chernobyl, the radioactivity changed the people physically. In the LA world the green goo represents the negative junk you feed your mind. In turn twisting our hearts, calling good evil and evil good.

2) What’s your earliest memory involving art or creating art?
Kindergarden... I was big on drawing cars/hot rods and hearts for my teacher Mrs. Silvia... she was soooo hot.

3) When are you most productive / when do you normally work on art?
I would say from 12 to 6 in the morning... I have three boys so I try and take advantage the quiet time. 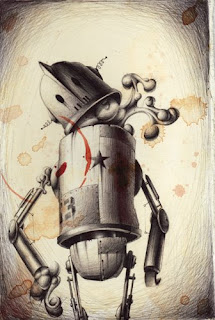 4) You have a day job as a graphic designer. Any feedback or such for artists looking to really make an impact in this super competitive and always evolving field?
Yeah... be more than a designer... come to the table with ideas. It's easy to find a graphic designer that can make something look good. Much harder to find a team player that can look at the problem and think big picture. Plus it's probably the coolest part of the process, the concept phase. Most of all, work hard.

5) The number ‘5’ appears in several of your paintings. Can you shed some light on the significance of this number in your works?
It's now permanently making an appearance on my arm. It represents grace, it says God loves me/you despite how I am... who I am.

6) Tell us something about yourself that someone would never guess in their wildest dreams.
Hmmmm... I spar at a jujitsu academy. Recently broke a finger on my painting hand training with Gabriel Gonzaga. It was my first time breaking a bone and I'm stoked that it happened in such a cool way. However I do feel like the biggest moron for doing it while trying to make art for Red Forest. I apologize ahead of time for all the uneven lines you'll see in the show.

7) Are you reading anything right now?
The Making of a Man of God, it's a book by Alan Redpath. Goes into the life of King David, it's my research for a show I'd like to do one day. 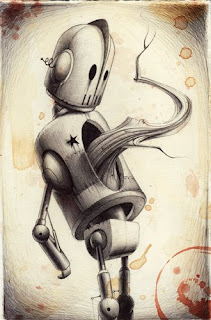 8) Do you listen to music while painting/drawing? If so, do you have a current favorite that inspires?
Anything from the Marley family, Ozomatli, The Clash, Dead Can Dance, Fugazi, Gorillaz, Jurassic 5...

9) If you had to explain your work to a stranger, how would you do so?
It’s rare to find me describing my work. If anything I tend to talk about the idea behind KMNDZ.

10) Favorite artist (living or dead) and what makes them special to you?
I have many but if I had to choose one, I would say Bill Watterson. His art helped me get through my teen years, helped me laugh at my self in stressful situations.
I also have to give a shout out to the Date Farmers, Jose Parla, Ian Francis... also Dalek who is on some serious next level stuff. Mad sick artists, too many to list.

11) What have you got coming up in terms of shows and projects after "Red Forest"?
Vanguard / Art Basel in Miami with Thinkspace and also Mark Murphy, a show @ Andenken Gallery with ARTSPROJEKT, and a super uber top secret project with Level 42E. 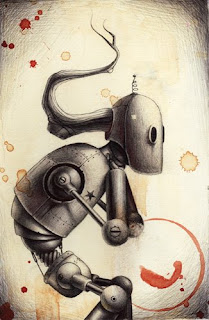 12) You work a great bit with GenArt and Keep-A-Breast on numerous special events, not to mention a good number of additional ventures via your involvement with Andy Howell’s Art Projekts organization. Any feedback/advice for artists looking to do more outside the standard makeup of just going after shows with galleries?
Always keep in mind on how small the industry is. Everyone knows each other, in turn talks to each other. With that said, be respectful, always represent your self professionally, Hustle, work hard, don't sleep, have fun, and you’ll most likely have people wanting to work with you.

13)If people walk away with one thing gained/learned from one of your shows, what would you hope that would be?
I would love to inspire artists or people in general to wake up and do something productive. To put themselves out there despite what others may say. More importantly to know that God loves you and that this world is temporary.

And if you haven't yet, add up KMNDZ on MySpace here: http://profile.myspace.com/index.cfm?fuseaction=user.viewprofile&friendID=48017733

Red Forest
Fri, Oct. 10th 7-11PM
with Ekundayo
So can't wait!!! If you haven't yet, shoot a mail now to contact@sourharvest.com to be added to the preview / waiting list for this show.
Posted by Andrew Hosner (founder / editor) at 1:19 AM